There have been whispers of the GoPro Hero 10 on the horizon for quite some time, and with very few statements regarding it, the new features have been left to the imagination. In some ways, this is pretty exciting as it means we get to contemplate all the things we’d love to see in a new GoPro model.

In this guide, we take you through the estimated release date, the leading rumours about what this new model will contain, the features we’d love to see, and how much this shiny new camera could set you back when it finally hits shelves.

GoPro Hero 10 has been released!! 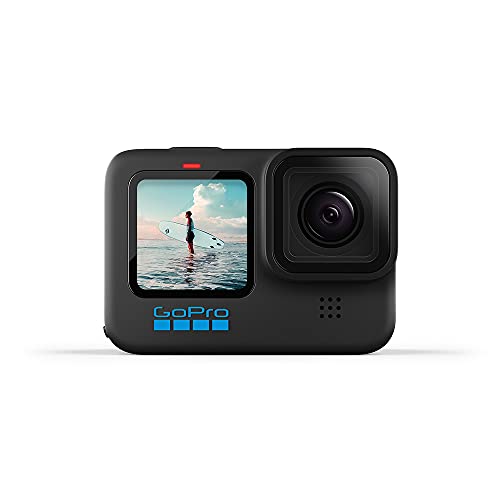 While there is no confirmed price for the GoPro Hero 10, it is currently estimated that it will retail for around $600. This looks at past trends and release prices, so the actual price could be a little higher (or even a little lower).

Of course, the classic GoPro design is becoming a little predictable. There are rumours that the GoPro Hero 10 will feature a larger screen as well as a camera that is able to record images and video in 8K and over 120FPS – some even suggest they might go as high as 200FPS.

Of course, the lens is expected to be of exceptional quality as well, capturing images in a way that no previous model has been able to. It has been suggested that there will be a max lens mod, allowing for some seriously crisp results.

There have also been rumours that they plan to add a detachable screen, much like a smartphone, to make editing and posting on the go much easier. This feature would be exceptionally helpful for bloggers and influencers.

Some rumours suggest that the GoPro Hero 10 will have wireless charging capabilities, bringing it up to speed with most modern tech that already has these fantastic features. It allows for better portability, and since the GoPro is made for travel it only makes sense to include this.

Features We Want to See With The GoPro Hero 10

There are quite a few features that we would like to see included with the GoPro Hero 10. One of which is having a small range, each of which offers different features according to budgets and needs. This would definitely open up the Hero 10 to improved versatility.

We’d love to see a slow-motion feature added in. One that allows for slow-mo at 2.7k alongside an impressive 480FPS. It would have incredible results, and since slow-motion videos are incredibly popular, it would be a useful feature for streamers and content creators.

A built-in ND feature would be fantastic. Many mirrorless cameras already offer this function, and having it in the GoPro Hero 10 would mean that you could turn off or reduce exposure by a few stops – shooting at wider apertures with brightly lit subjects and playing around with slow shutter speeds, creating motion blur effects like you can with interchangeable lens cameras.

It would be good to see a new GP processor. They used it in the GoPro 6, but it’s been a while since it has had an update. While it is a risky business move, it really paid off with the GoPro 6, and we don’t see why an improvement would be any different with the 10. A GP2 processor would be a huge change, and one that’s welcomed by all GoPro users.

Improved low light technology would mean better photographs at night, something that I can safely say we would all like to have. To have automatic technology that could capture the night in the GoPro Hero 10 would be an absolute game-changer for the brand.

The portrait mode on current GoPro models isn’t great, you get a better result with an iPhone. To see this developed and improved for the GoPro Hero 10 would be fantastic, and it would result in a more diverse range of images that users can enjoy.

Multi-camming would be great to make editing faster and also capture incredible videos and images with your friends. Being able to synch up while you are on the go would open up a whole new world of video editing and creation, allowing for enhanced creativity.

We’d like to see better effects, filters, and features. Since editing and creativity is such an important part of content creation, this would really open things up for creators that are looking to make something unique and eye-catching for their pages and viewers.

Following on from this, social media and app integration would be great. This could allow you to live-stream direct from your GoPro to your Instagram or Facebook so that your followers can come with you on your journey. Things like this need to happen in the digital age, technology is moving fast and GoPro needs to keep up.

Motion detection would be a pretty exciting feature. If you place the camera at a new angle, or you fall and it is lying at a strange angle, it could automatically adjust itself to record things the right way up. This could also work with multiple cameras that are synched together so that they all start recording from the correct angle.

The GoPro Hero 10 is sure to be an incredible addition to the range. We’re excited about the release and all the features that they announce will be included. We also really hope that they listen to some of the things we’d love to see and incorporate them into their new release.

What are you most excited about for the GoPro Hero 10? Are there any other features that you would like to see included with the new camera? Make sure you leave a message in the comments, we’d love to chat with you about all the possibilities heading our way.